――Introduction
This program will be sent by the following sponsors

※）Please note that we will promptly deal with any objections or deletion requests from the copyright holder regarding the quoted captured images.（引用したキャプチャ画像に関しては、著作権権利者様より異議申し立て・削除要請があれば、速やかに対処いたしますのでご承知置き願います ）

Have a nice day！
Listeners, this is Awayuki, the navigator.  Breakfast is important

How are you doing？
Familiar, assistant Shimari.  Don't skip breakfast

Today is the 1st article of "English version"

Since it is translated by Google Translate, the nuance may be suspicious, but please bear with me

The cooking scene is excellent in the "BAKI series"

Before that, it is better to explain the "BAKI series"

BAKI-series. A general term for the fighting manga by Keisuke Itagaki and the media mix works based on it. Weekly Shonen Champion (Akita Shoten) signboard work. Japan's most major fighting work. The cumulative total has exceeded 75 million copies. In the future, it is unlikely that a fighting work that can reach the realm of BAKI will be born. The evaluation of cooking depiction is high enough to be comparable to powerful fighting depiction. 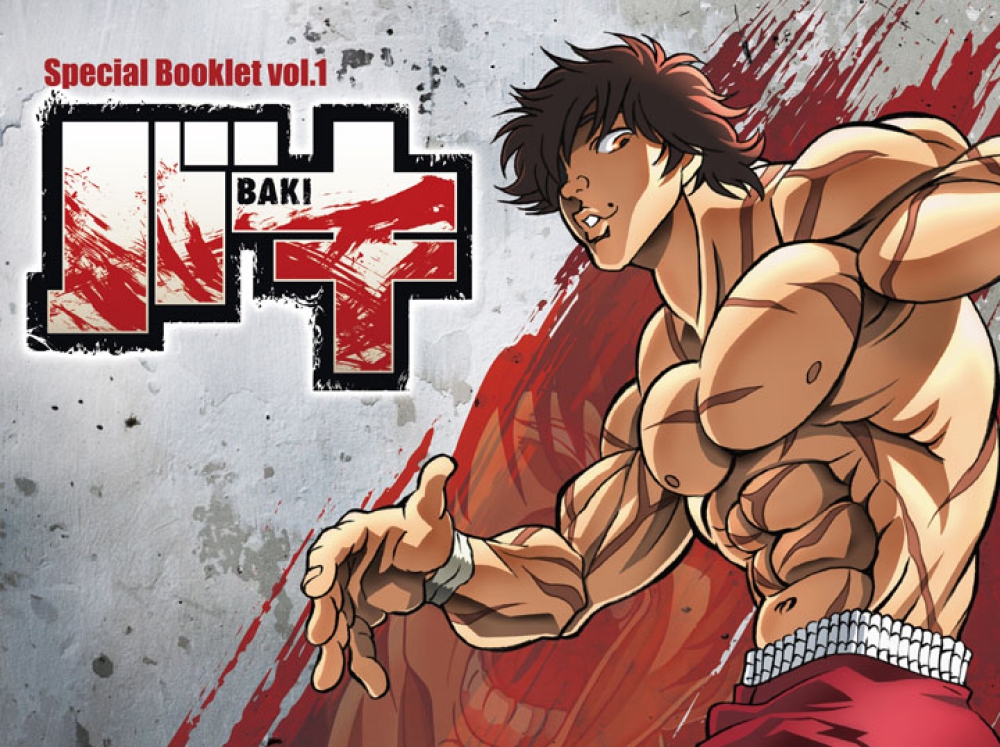 In 2001, even the biggest tournament of "Baki the Grappler" was animated

And in 2018, re-animated from the most deadly prisoner edition of "BAKI"

In 2020, the second season of "BAKI" will also be animated. The original 3rd series "Hanma-BAKI" has also been decided to be animated

Then, the explanation of the main subject, "Happy breakfast"

What is "Happy breakfast"？

Happy breakfast. Breakfast made by Baki from the third episode of the BAKI series, "Hanma-BAKI", Volume 25, Episode 207, "Home Cooking". Menu includes bacon and eggs, seaweed miso soup, grilled saury, heaps of cabbage, and rice.Bacon and eggs with 4 eggs and a bowl of cabbage. This simple menu and delicious cooking drawings overlap, making it a legend among readers. 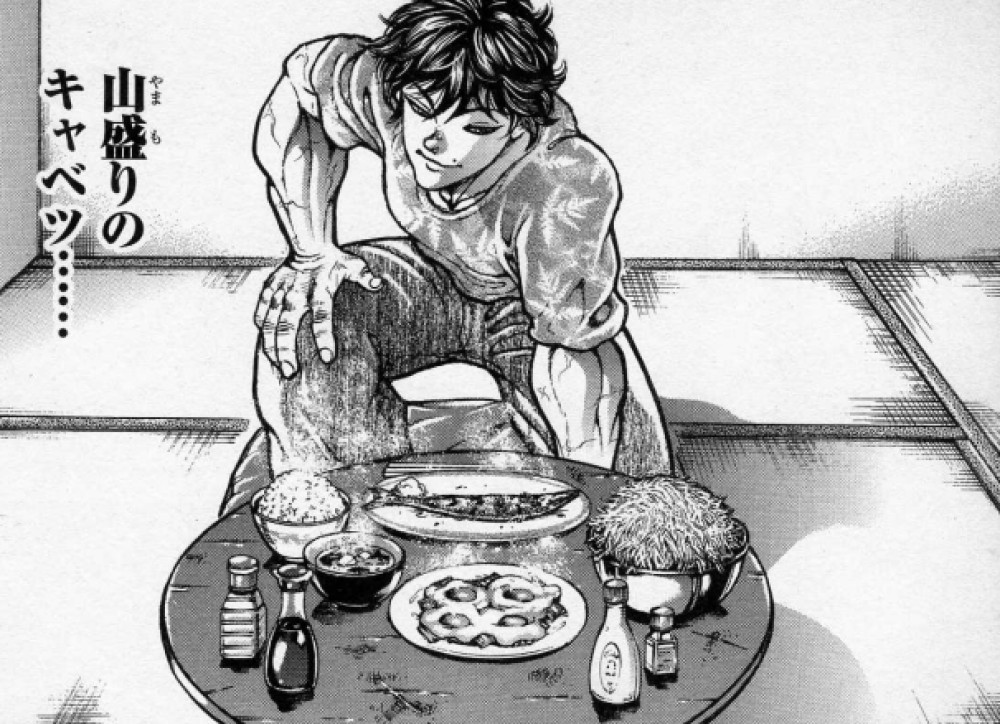 It was a popular menu in collaboration with restaurants

Menu of "BAKI Cafe" which is a collaboration project

Can the producer go beyond the "BAKI Cafe"?

Let's get to the main subject

First of all, from the place where all the ingredients are prepared

Rice and miso soup are as follows 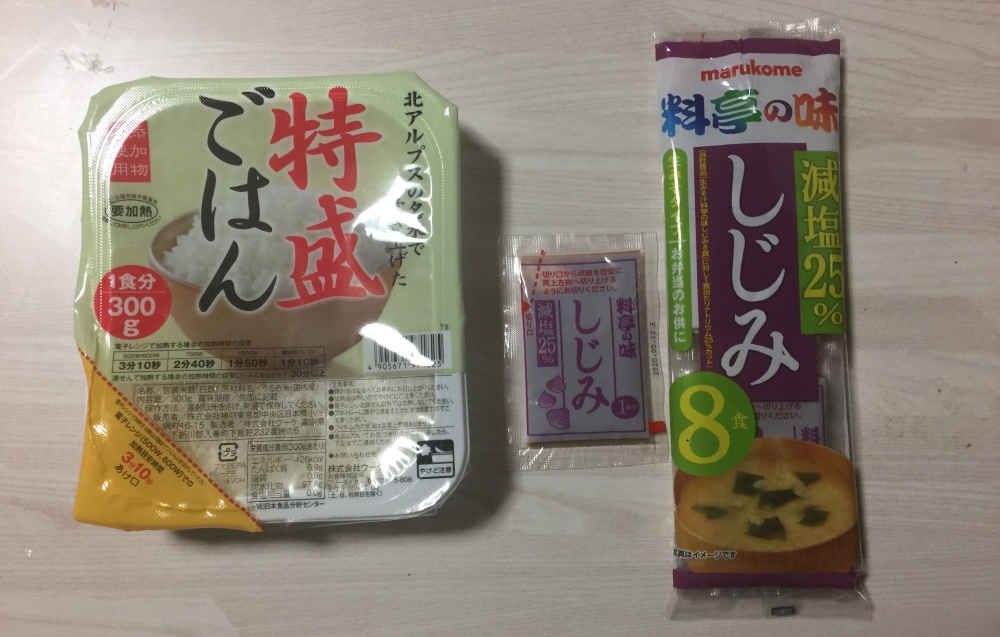 Suddenly it's a level of omission

I'm surprised. Packed rice is 300 grams and 100 yen, so it has excellent cost performance, but even miso soup is instant

To prevent diabetes, packed rice that can prevent overeating is effective, but miso soup is not

Let's go to the ingredients for bacon and eggs 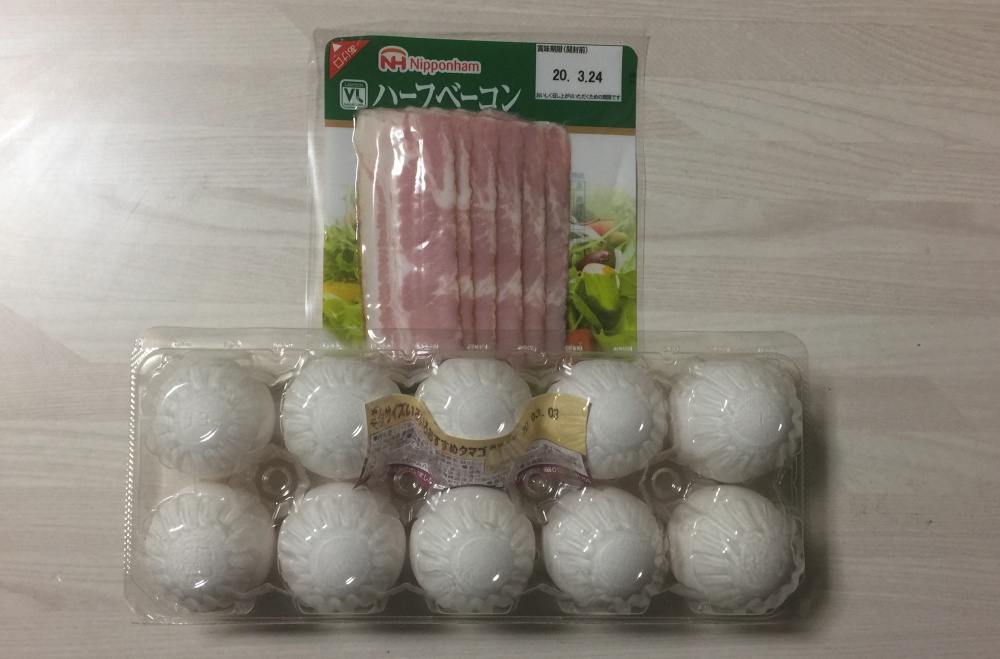 There is no way to get strange

Next is the saury

Grilled fish is a hassle, and cleaning up the kitchen is difficult, so I just wonder if I should prepare a side dish

I searched for a ready-made dish, but I couldn't find the grilled saury

Well then, wait, cabbage and radish 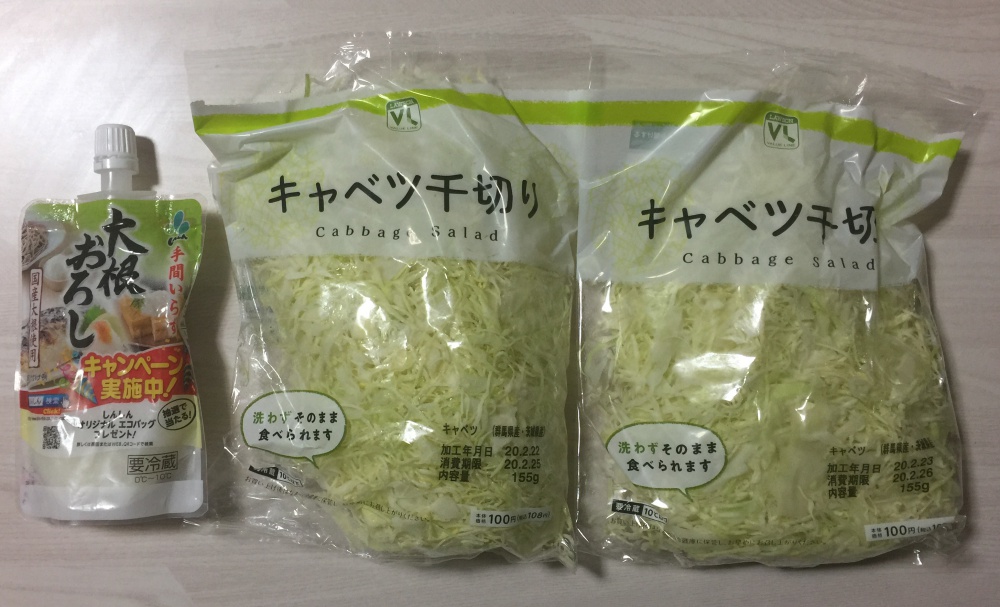 It's too cruel, in many ways

I want to hold my head

Let's move on to cooking when the ingredients are ready 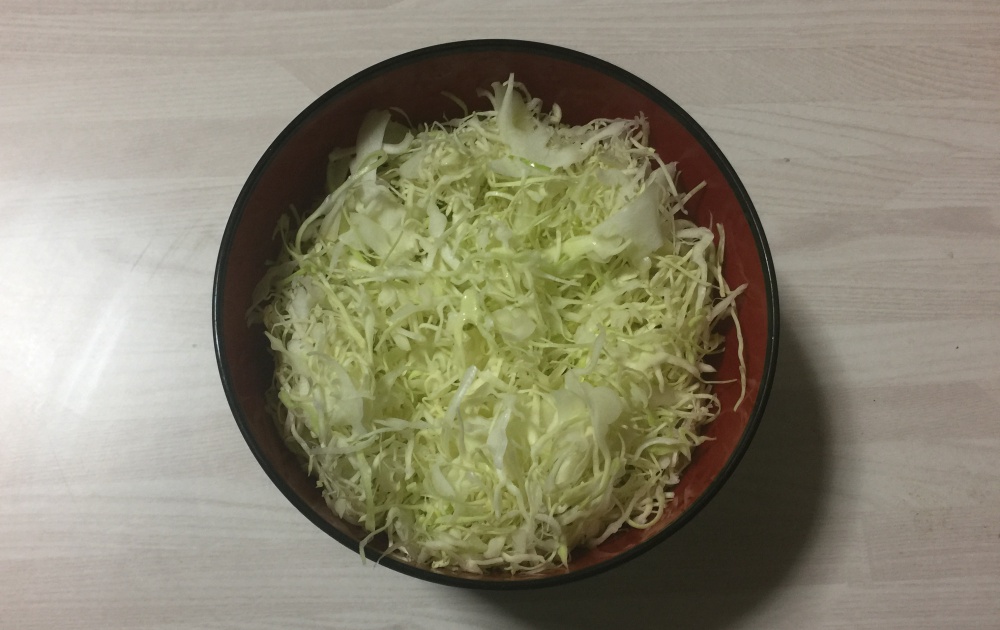 You don't need to wash it with water, so put it in a large bowl and you're done

This bowl is relatively large and I prepared two bags for "heaping", but at first glance I was not confident that I could eat it, so I decided to use only one bag 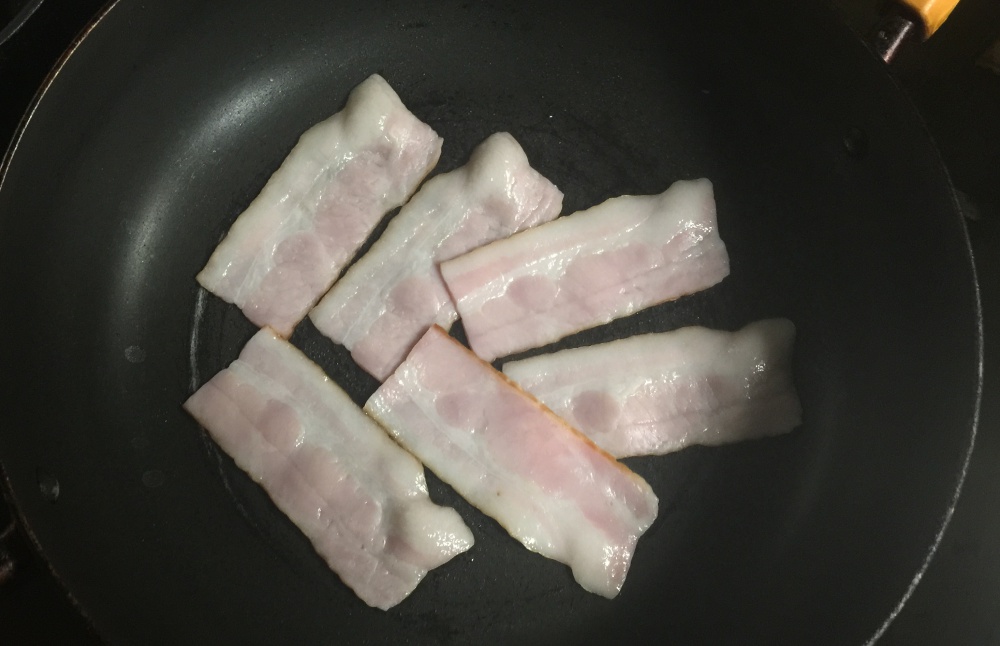 I will bake from bacon

I didn't oil it. Only fat from meat is enough

Now, let's check the time and drop the egg. It's a moment of tension 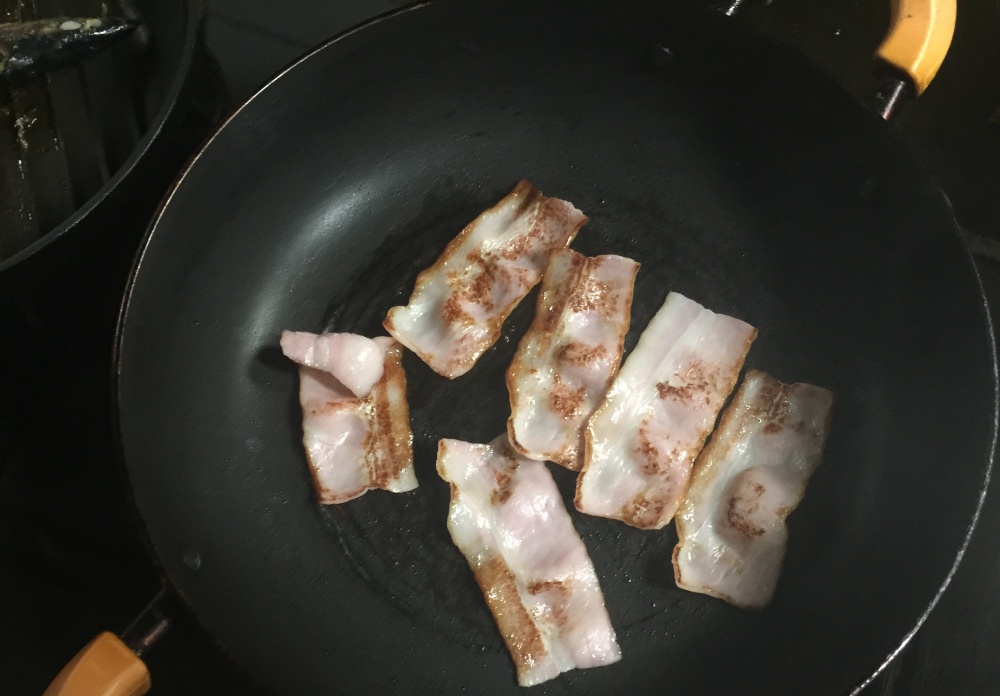 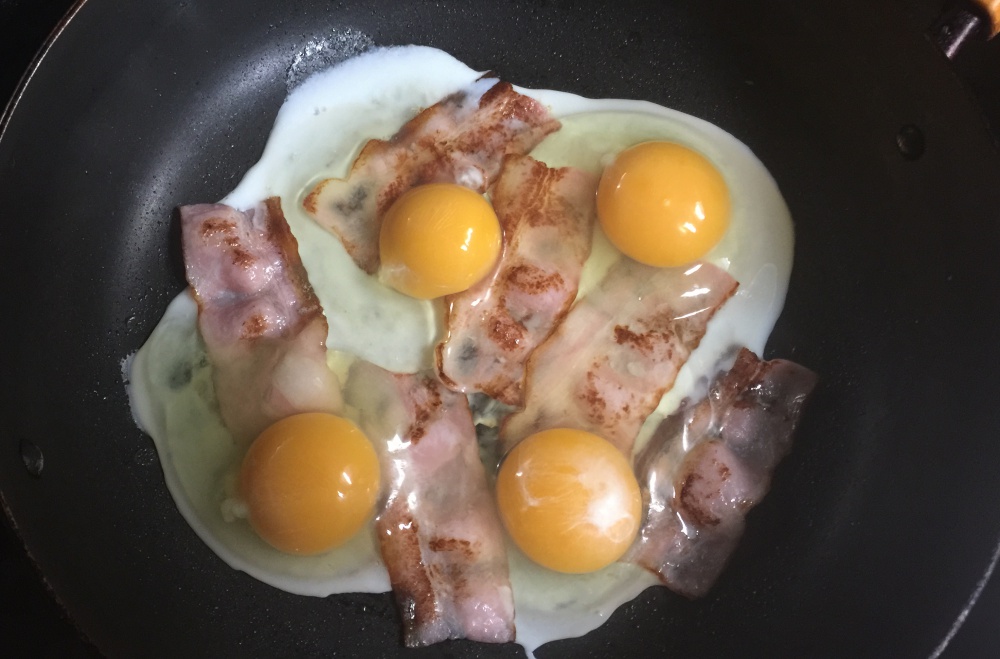 By all means, four are too many

The latest research also reports that egg cholesterol does not affect the human body so much. But it still makes me uneasy

Add a little water and cover 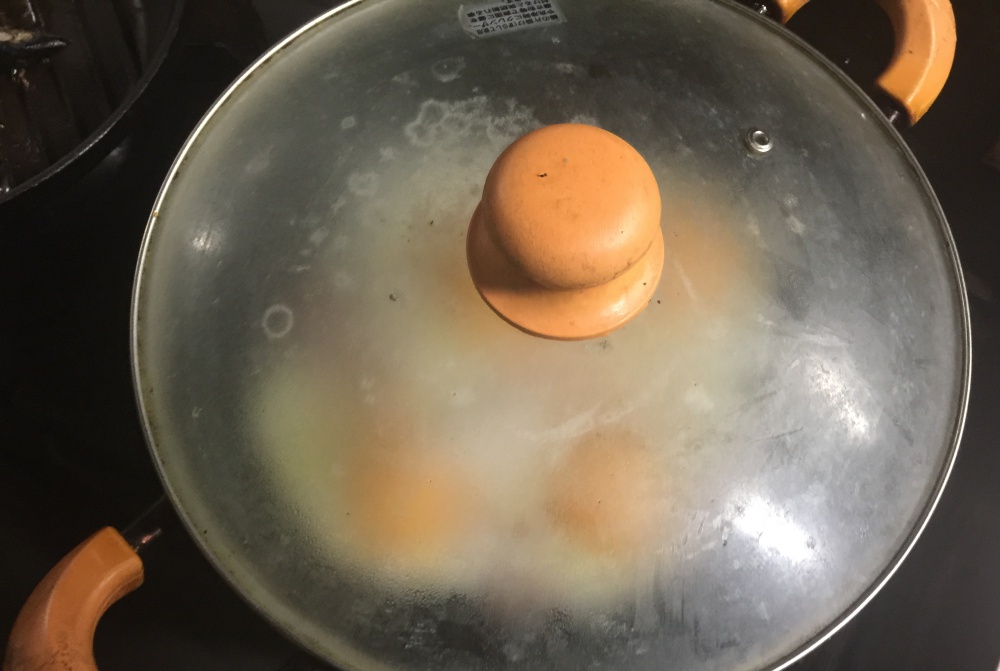 A glimpse of the fish head on the left end

The saury is also baked at the same time

Open the lid and check that the water has blown off 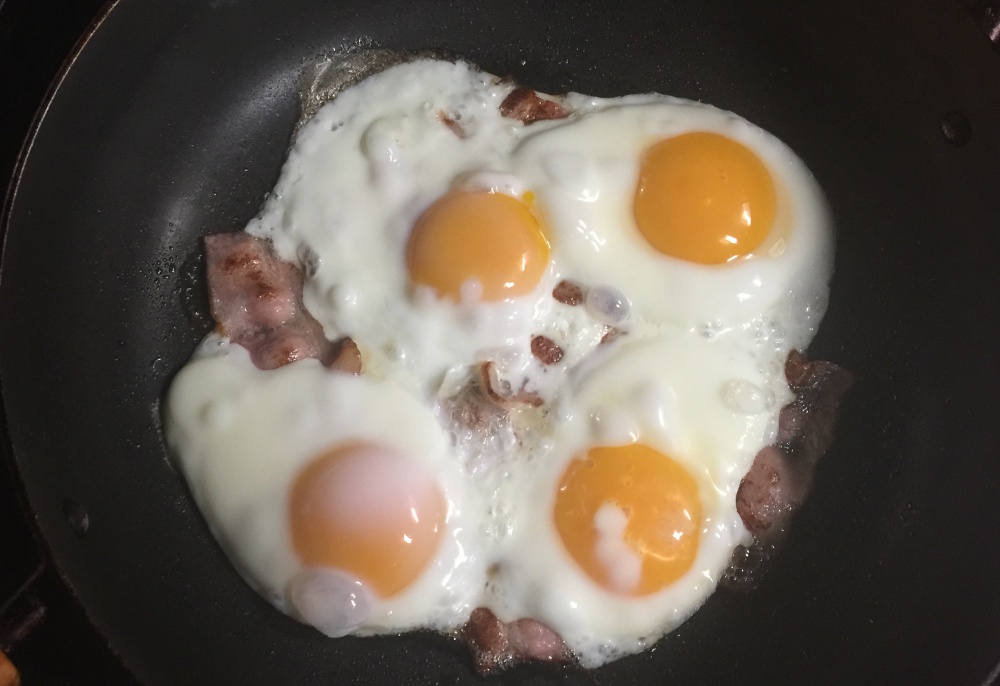 It's a success. I was able to do it well 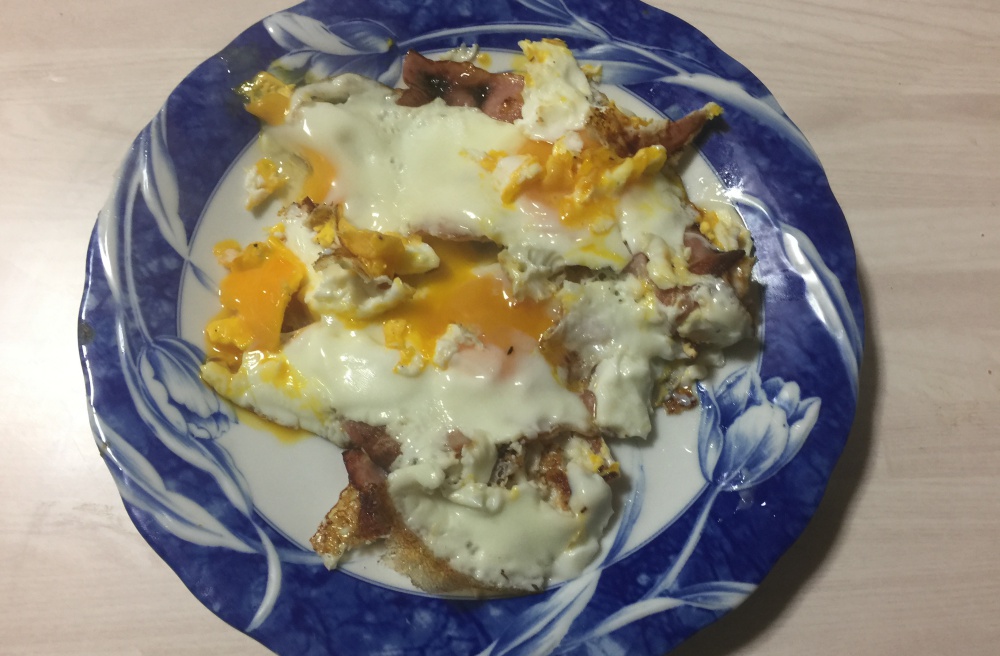 It ’s a catastrophe on a plate.

There was no problem if there were about two eyeballs, but four were too many, or when I put them on a spatula, I lost to my own weight.――You can see it（ご覧の有様だよ）！

Nostalgic, that phrase. How many people can understand in the English-speaking world？

There is no choice but to fail. Finally go to the troublesome grilled saury with salt

We don't use the grill equipment

In consideration of cleaning up, We used a special frying pan for fish and grilled meat 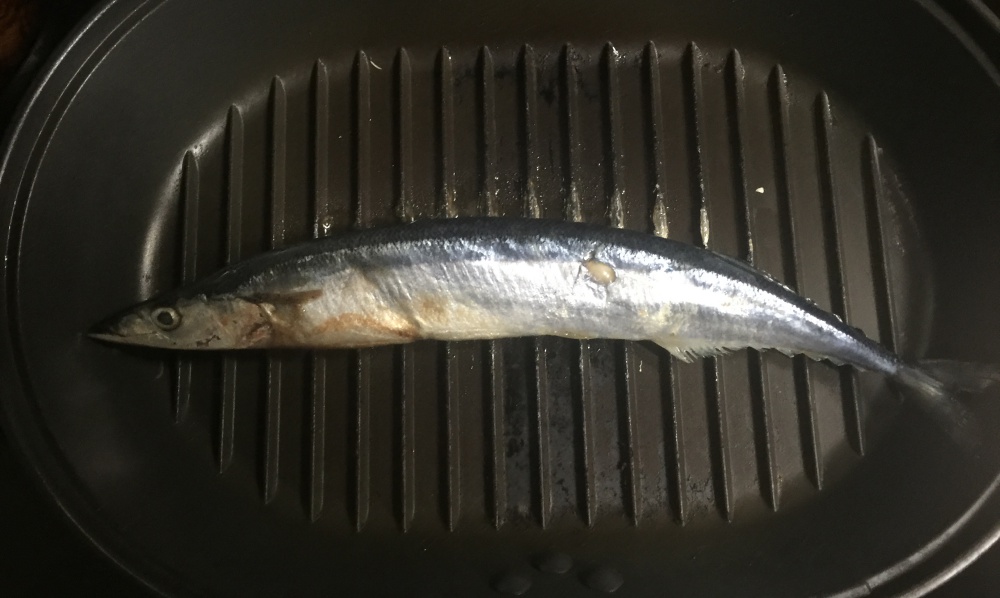 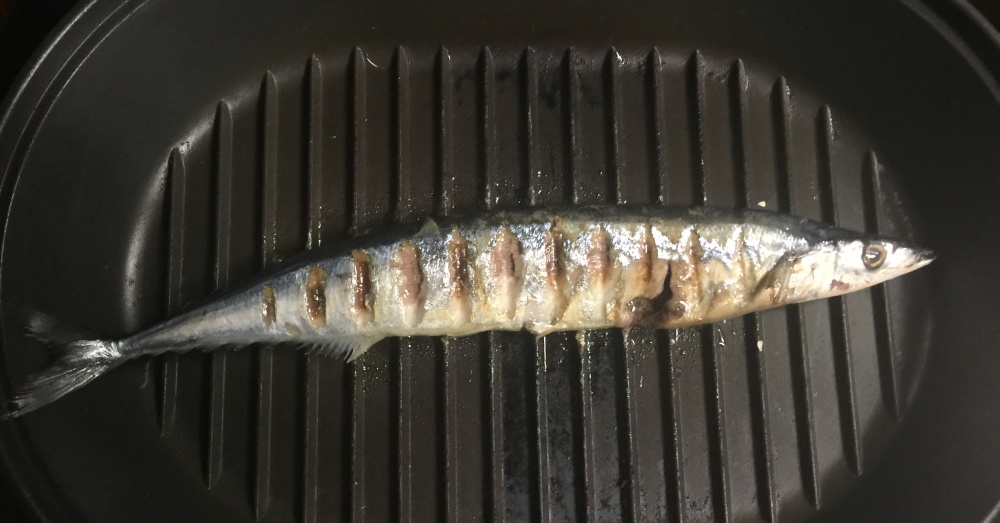 We will bake it slowly over low heat

We turned it over many times on the way

The baked products are as follows 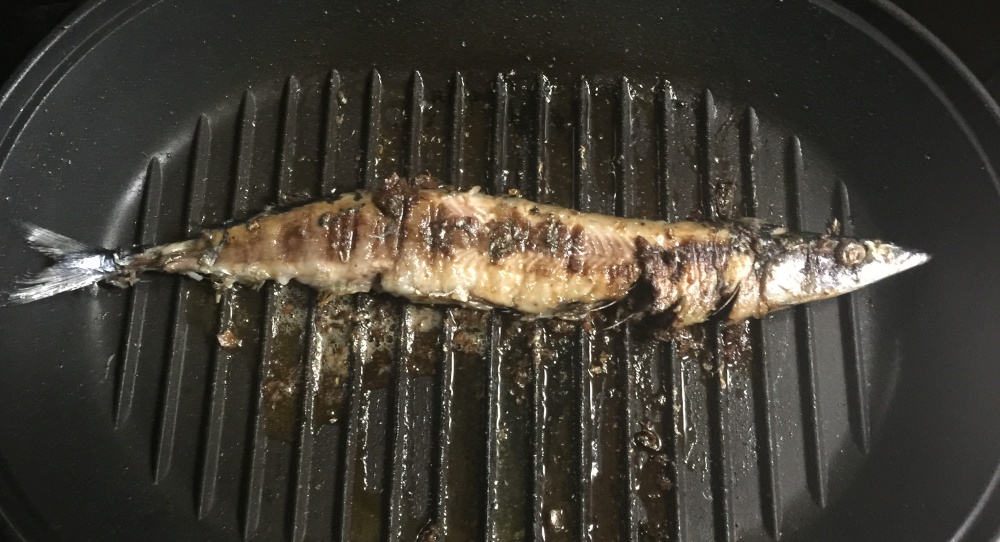 Due to the effects of being turned over many times, the skin that was supposed to be crispy became disastrously tattered

It looks the worst

However, it took a lot of time and effort due to the slow low heat, and the fragrance was outstanding and the body became plump

It looks unpleasant in the photo 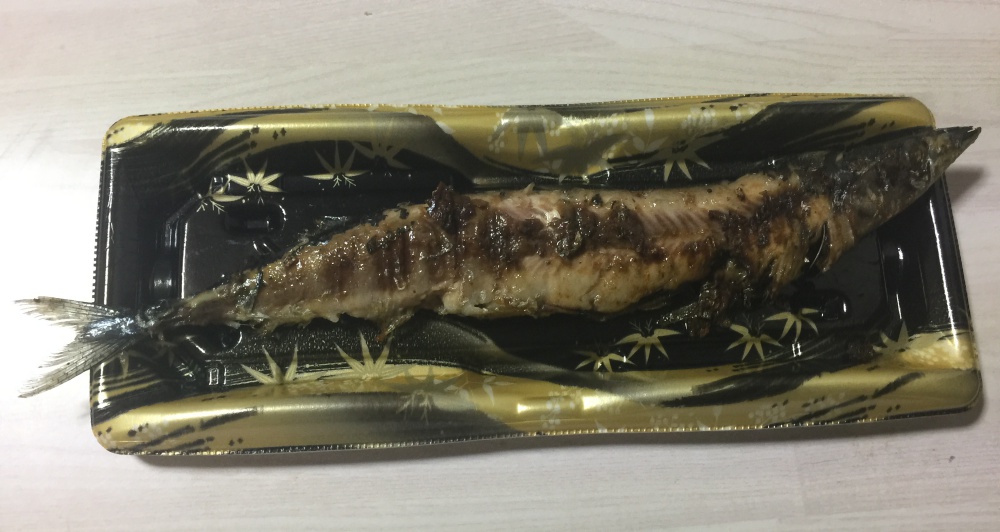 Didn't you have a proper plate？

I thought I'd go buy it, but it was a hassle, so I replaced it with a paper plate for delicatessen

At least use a paper plate of grilled fish pack

When I revealed my identity, it was a paper plate in a pack that contained nigiri sushi. I bought a sushi pack (about 500 yen) just to put saury on it

Far from being cheap, it is relatively expensive
Let's calculate the price 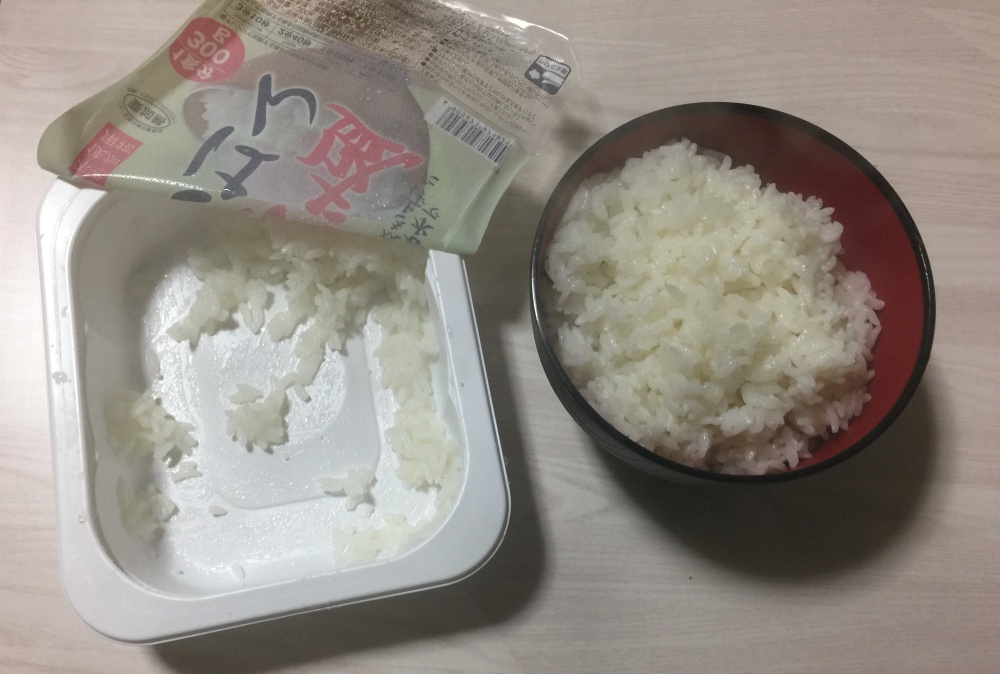 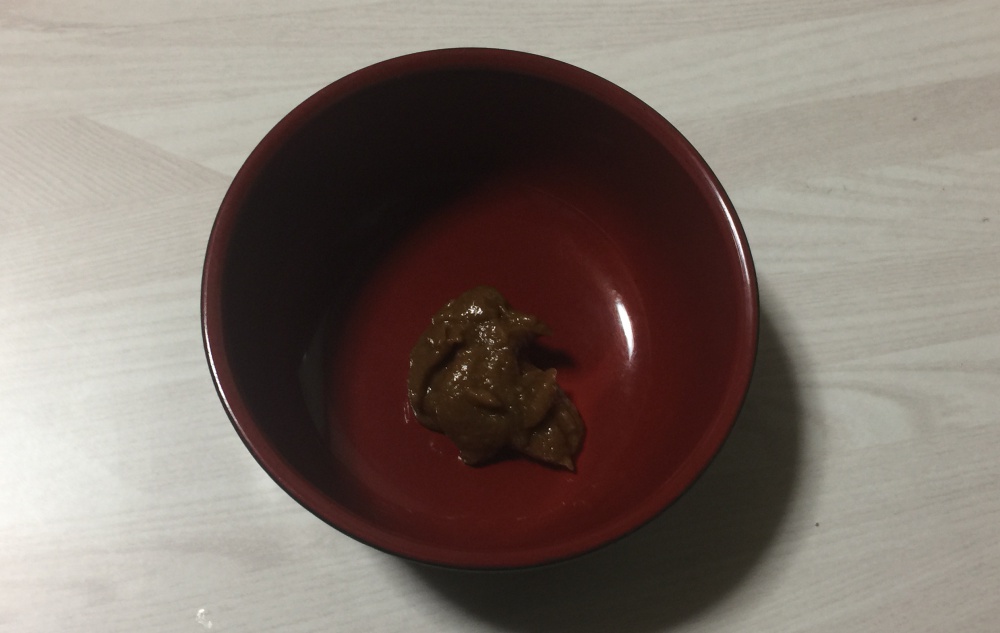 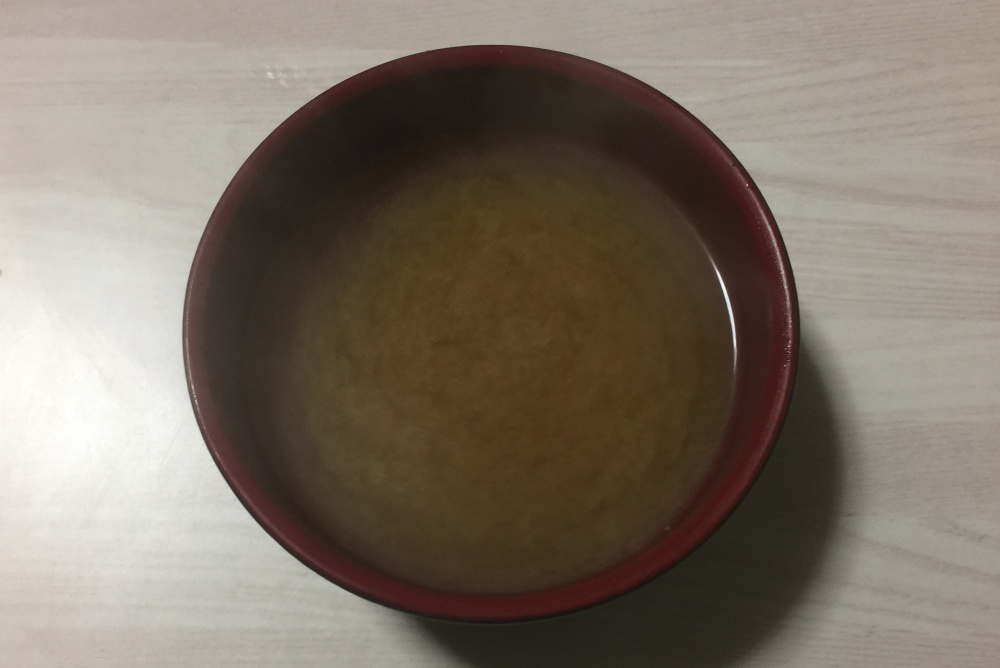 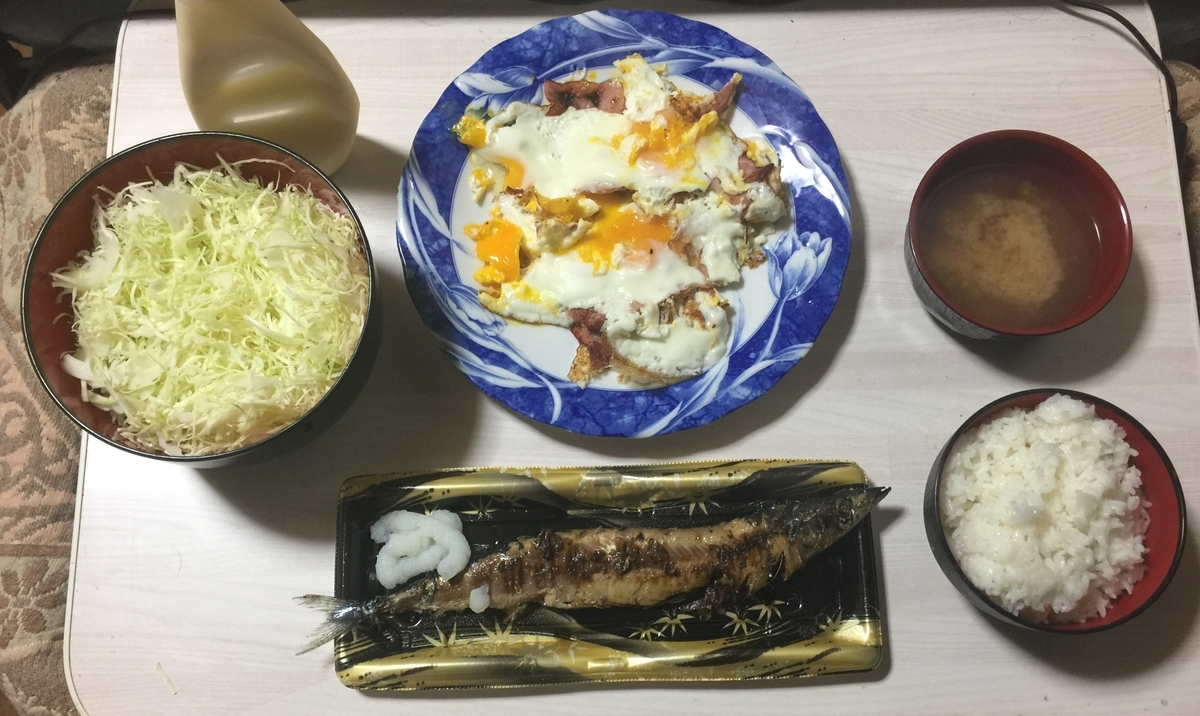 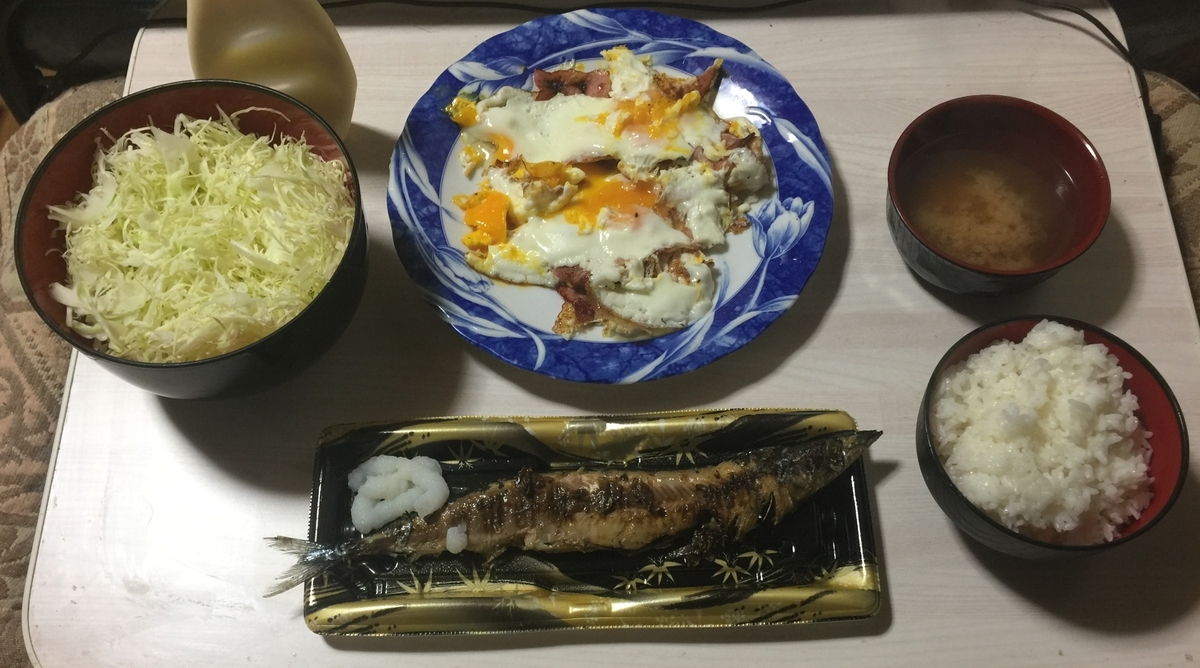 The arrangement of each menu is faithful to the original. It's not a round table

The bacon and eggs that are miserably failing are ruining everything

Unlike the You Tube video, this is a still image, so let's modify it

What is a fix？ 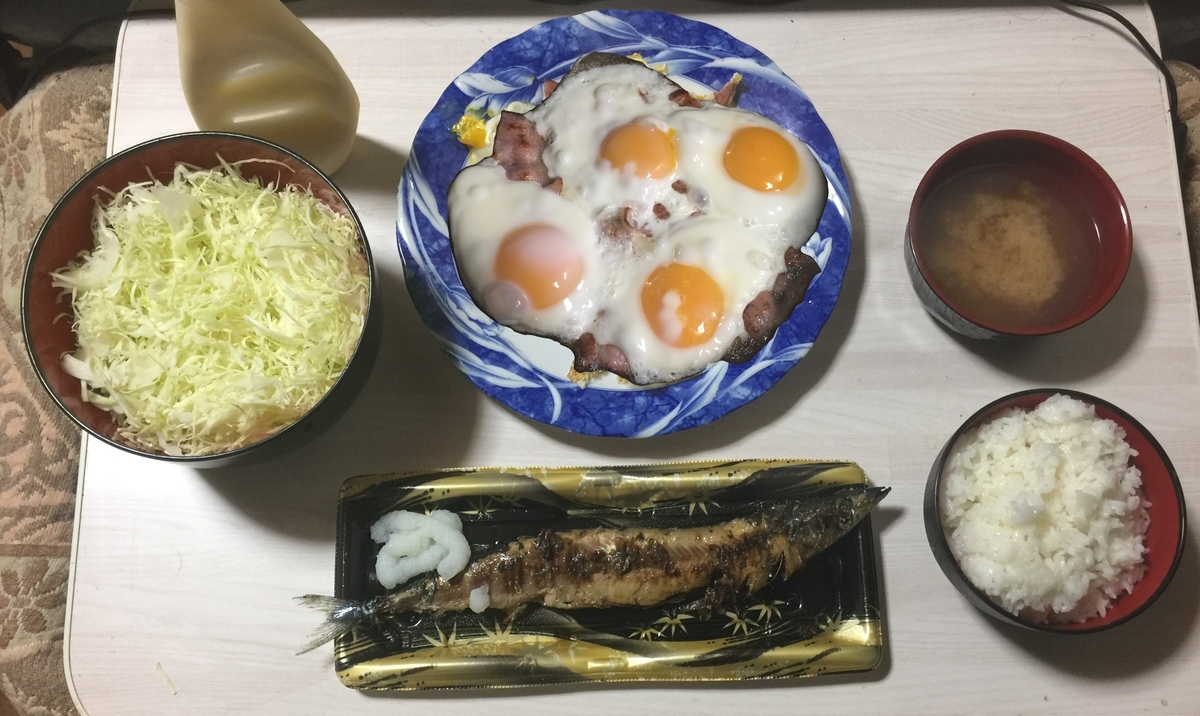 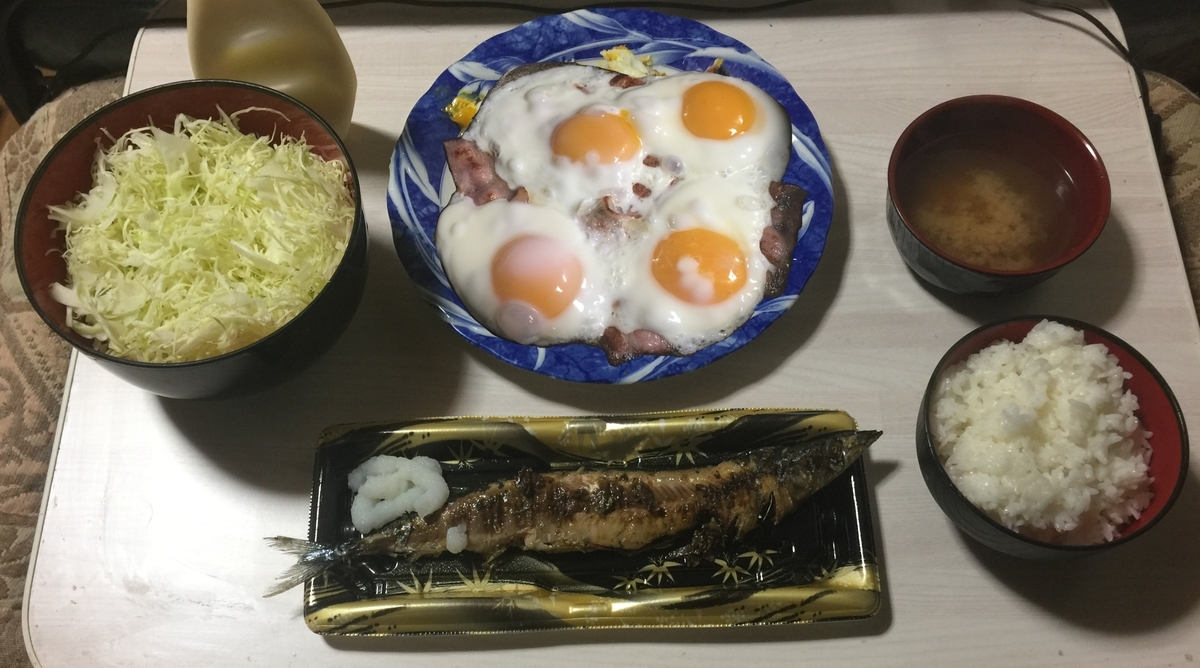 Isn't it forgery and tampering？

Can you stop me or say a dangerous line 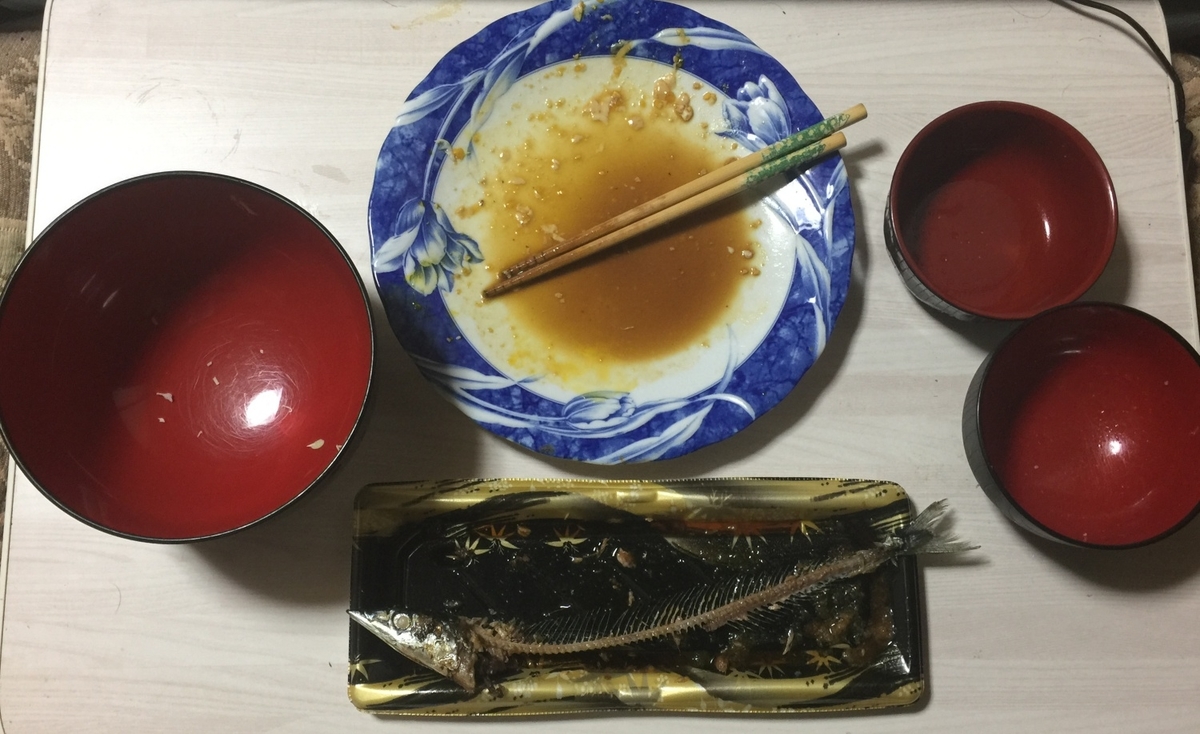 We managed to finish it

The answer was correct without putting two bags of cabbage. I'm glad I stopped the heap

Rice, miso soup, saury, half cabbage bowl, 2 bacon and eggs―― I was satisfied with this amount.

There were many four bacon and eggs highlights. I got tired on the way

Cabbage was a strong enemy, really

Annotation！  "Google Adsense" will be broken, so please enjoy the original version instead of "Google Translate version" if possible. 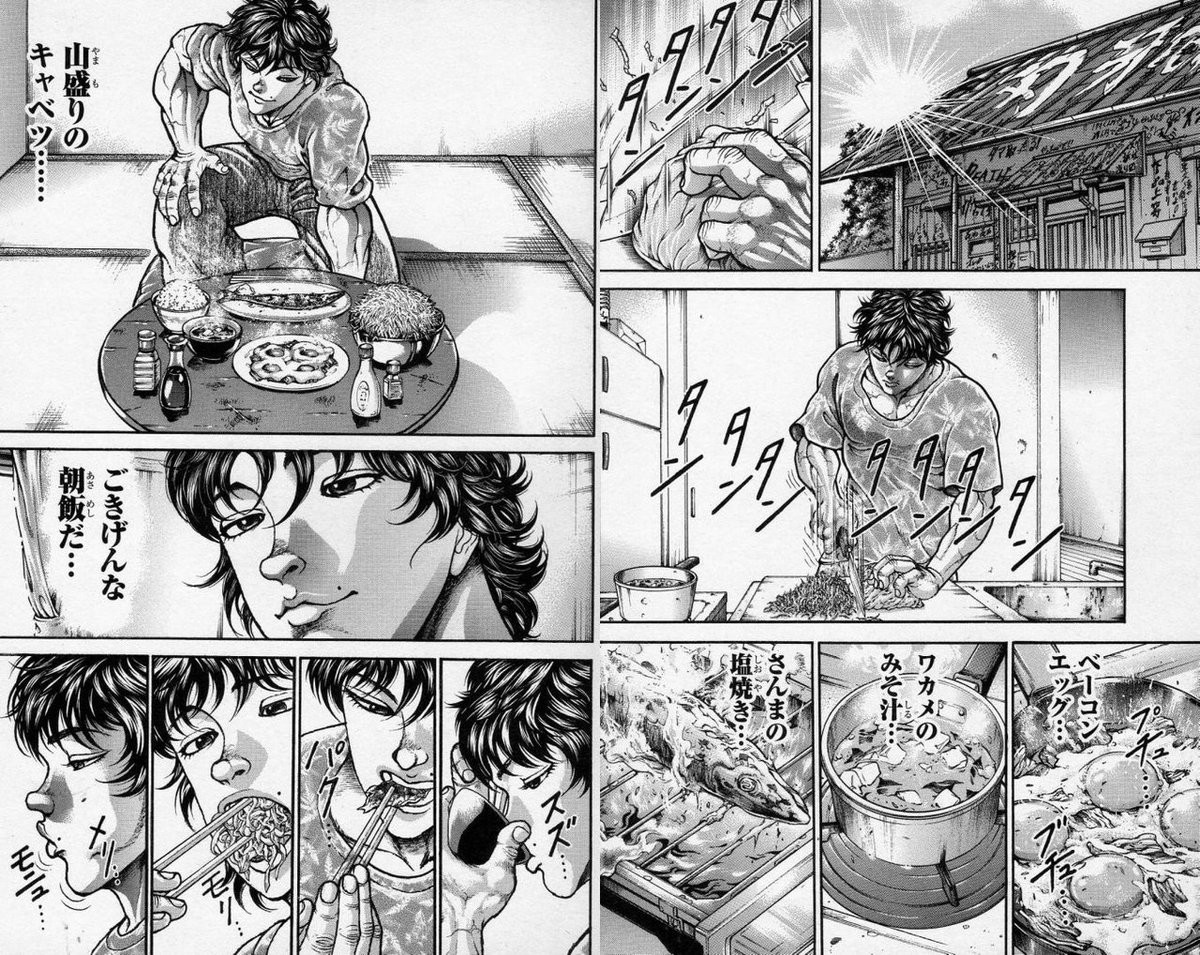 ※）Please note that we will promptly deal with the quoted captured image if there is an objection or deletion request from the copyright holder.（引用したキャプチャ画像に関しては、著作権権利者様より異議申し立て・削除要請があれば、速やかに対処いたしますのでご承知置き願います） 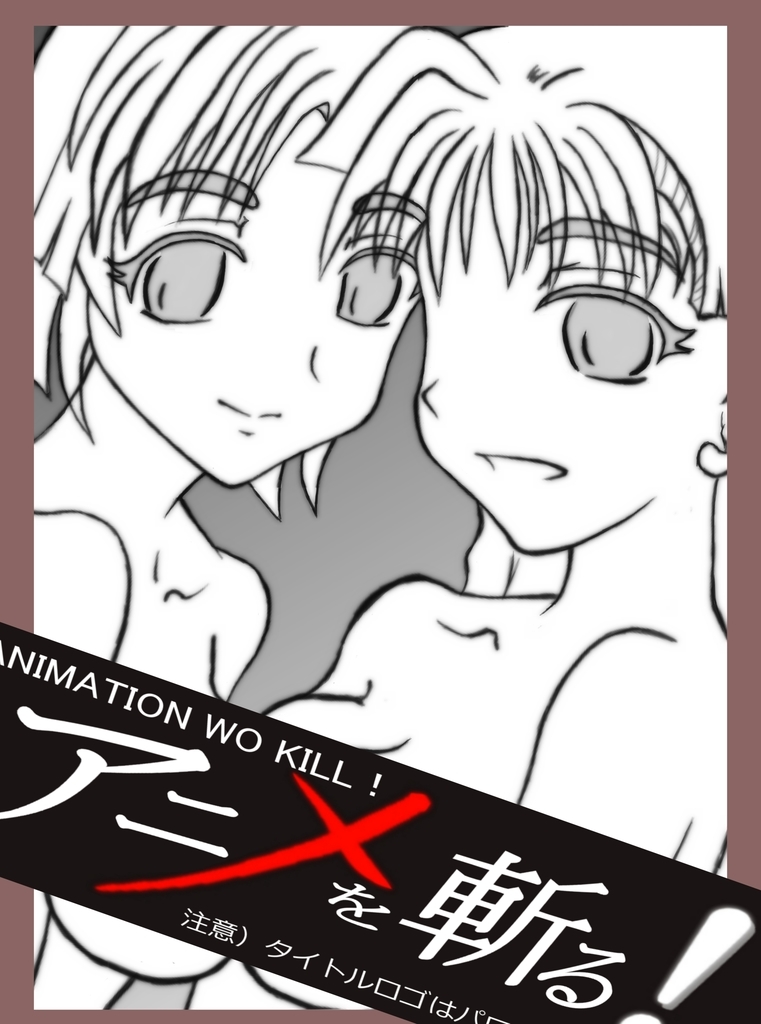